The holiday season will be quite festive at Country Home this year with special entertainment and the addition of a puppy named Mr. Poppers. 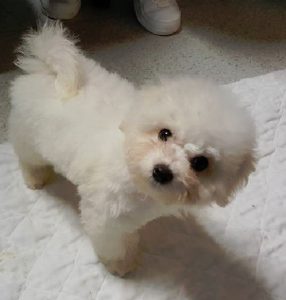 Mr. Poppers, a 3-month-old Bichon Frise, joined us at our Elbert County assisted living facility on Nov. 6, 2017. He fills a void that was created by the death of Romeo, another Bison Frise who passed away in June after 13 wonderful years of entertaining and calming our residents.

As you may already know, pets are very helpful when it comes to improving the mood and health of people they are around. Pet interactions help the elderly, both physically and mentally, by giving them new meaning and improving their overall well-being.

Pet therapy and Romeo’s spirit stay alive with Mr. Poppers. While Country Home residents and staff came up with all sorts of cute names for the new pup, Mr. Poppers was selected because it was Romeo’s nickname. Plus, the puppy pops around like a little jumping bean.

As a member of the Flynn line, Mr. Poppers also comes with great credentials. His dad has been the #1 Bichon Frise in the country for the past three years.

But Mr. Poppers isn’t the only one who will keep residents smiling as we enter the holiday season. Professional entertainer Steven St. James will sing at our Christmas party on Dec. 4. There may also be a visit from Santa Claus and an outing to one of the Parker PACE Center’s holiday shows.

We’re sure to have some other surprises between Thanksgiving and the New Year, maybe even watching – but not eating – the wild turkeys that hang around our assisted living facility located in the countryside just outside Parker in Elbert County.